Human Needs and Human-scale Development, conceived by Manfred Max-Neef and others, are seen as ontological (stemming from the condition of being human), are few, finite and classifiable (as distinct from the conventional notion of economic “wants” that are infinite and insatiable).

They are also constant through all human cultures and across historical time periods. What changes over time and between cultures is the strategies by which these needs are satisfied. Human needs can be understood as a system – i.e. they are interrelated and interactive. In this system, there is no hierarchy of needs (apart from the basic need for subsistence or survival) as postulated by Western psychologists such as Maslow, rather, simultaneity, complementarity and trade-offs are features of the process of needs satisfaction.

Manfred Max-Neef and his colleagues developed a taxonomy of human needs and a process by which communities can identify their “wealths” and “poverties” according to how their fundamental human needs are satisfied.

This school of Human Scale Development is described as “focused and based on the satisfaction of fundamental human needs, on the generation of growing levels of self-reliance, and on the construction of organic articulations of people with nature and technology, of global processes with local activity, of the personal with the social, of planning with autonomy, and of civil society with the state.”

One of the applications is within the field of Strategic Sustainable Development where the individual Fundamental Human Needs (not the marketed needs) and the mechanics of the collective social system need satisfying in a sustainable society. Together with other aspects of the Framework for Strategic Sustainable Development, including the (socio-ecological) sustainability principles it helps to plan and design for sustainability.

Needs are also defined according to the existential categories of being, having, doing and interacting, and from these dimensions, a 36 cell matrix is developed. 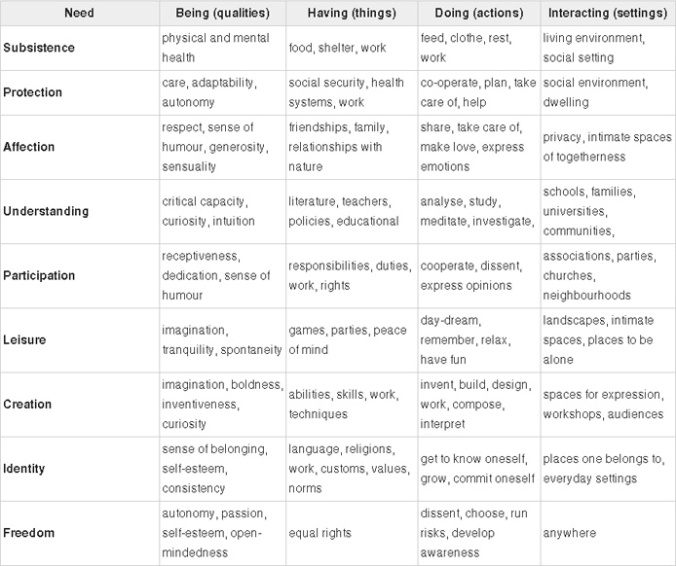