When the world finds itself in an unhealthy state, how do we disrupt patterns of behaviour? How do we create new behaviours that carry hints of further behavioural change which can then spread to other members of the community? At what point does this new behaviour conclusively disrupt and replace the old patterns, become the new norm?

As artist/growers RhysReeceRees are interested in undermining the political and corporate structures, in changing the normalised behaviours that filter down from the elites, deciding our patterns of consumption, thought, tastes, fashions, values. A glance at Brexit or Trump exposes instantly the manipulation, the deceit, the out-right lies.

And yet, these lies ride the challenges, evade the satire and all attempts at reason. Populations vote for billionaires who claim to be ‘one of them’ …

The cries of dismay, of utter horror, crying out the truth fall upon deafened ears, numb from the whispering of mass media and the ringmaster barons. 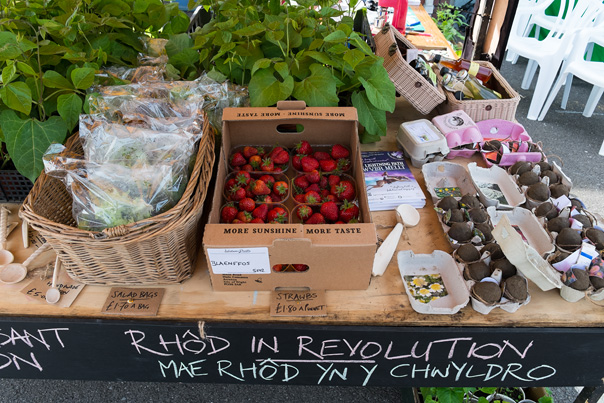 ‘Running Beans’ is about spreading an idea from a simple beginning that could ripple out and become more than the sown seed.

Plant your beans in a large pot or in the ground in a sunny spot.
Water in well and regularly.
Support them.
Harvest and eat them.
Come September leave some beans to plump up and form seed, drying on the plant.
Remove the seeds from the dry pods and store in a dry place for next year.
Share them with your neighbours, friends, relatives, co-workers to grow and tell them how you did it – ask them to pass their own collected bean seeds on in the same way – Running Beans!

And on, aiming for a new norm, where growing beans rather than buying them becomes normalised and the temptation to try and grow some tomatoes, or salad, or courgettes arises.

RhysReeceRees believe growing your own food is one of the most revolutionary acts open to citizens in Britain, it takes money and control from the multiples and corporations, breaking free of their value systems, their advertising regimes, the normalising of their ethos.